When he was young, he would tag after his big brother to a vacant field, where the neighborhood boys played softball. A towhead, he always seemed to end up playing outfield. Inevitably a long drive would head to the outer reaches of the park, and he would race after it. That is until he suddenly vanished.

Face it! It wasn’t the best ballpark in the world, and the “outfield” was a composite of high grass and deep holes. The last anyone would see of the young boy as he raced after the fly ball, arms outstretched, was his blond hair literally disappearing from view. It was no accident he played outfield. Yes, it was tough being the younger brother.

Years later, as Ted told this tale of his brother’s softball prowess, he bestowed upon him the moniker, “Golden Boy.” It stuck.

Good things happen to those who wait. As he was about to enter his teens, along came a younger sister and the Golden Boy began to nurture a side to his personality he had never displayed before. Now, he was the oldest and teasing his younger sister was his right of passage. While at the movies watching “The Wizard of Oz, he pestered her, pretending he was a winged monkey ready to fly her away. The theater was filled with a child’s voice yelling, “Stop it Harlley!” He enlisted a pal to pull dollars off our “money growing” elm tree. Do you have any idea how disappointing it was to find out that was not true? I’m still suffering.

Our lives were woven together loosely as many years were spent apart. During the 1950’s and early 1960’s, he was at Cornell, followed by graduate school at Purdue. I was in high school, then college and later working in downtown Chicago.

However, our lives intersected again in 1968. We both moved to California, he was up in Berkeley, and I was down in Palo Alto. While there, we visited often. Sometimes we went sailing in San Francisco Bay, on other occasions we enjoyed the pool at my apartment, and of course, there were visits to the wine country. We relished the freer culture that was northern California. Even after he moved back to Purdue, we managed to meet up for the Rose Bowl game in Pasadena.

We’ve had many adventures over the years – living both near and far apart — but we’ve always remained close. It’s been a long road from childhood to today. There have been wonderful happy times, and as life would have it, there were times of sorrow as well. Through it all, we’ve been each other’s support and may not have physically carried one another, but we did indeed lift one another emotionally.

With our long journey in mind, I’m reminded of Bob Russell’s lyrics.

The road is long
With many a winding turn
That leads us to who knows where
Who knows where
But I’m strong
Strong enough to carry him
He ain’t heavy, he’s my brother 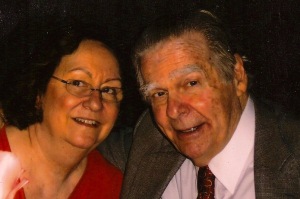 4 thoughts on “THE GOLDEN BOY”